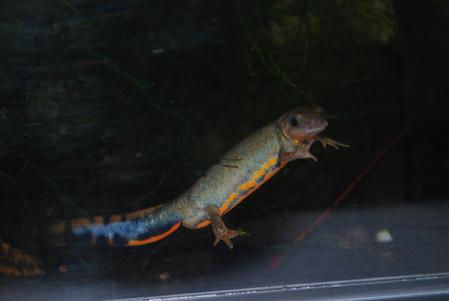 The Blue-Tailed Fire Belly Newts are salamanders indigenous to Japan and China. Like most other ‘fire belly’ newts, these amphibians have a brightly-colored belly, while the males of the species exhibit a bluish tail during the breeding season. They eat very little, once in every three days.

Length/Size – Up to 4.5 inches (females being larger)

Geographical Distribution – Only in Guizhou and Yunnan in China, and some parts of Japan

Predators – Foxes, grass snakes and herons; young ones and eggs are mostly consumed by fishes